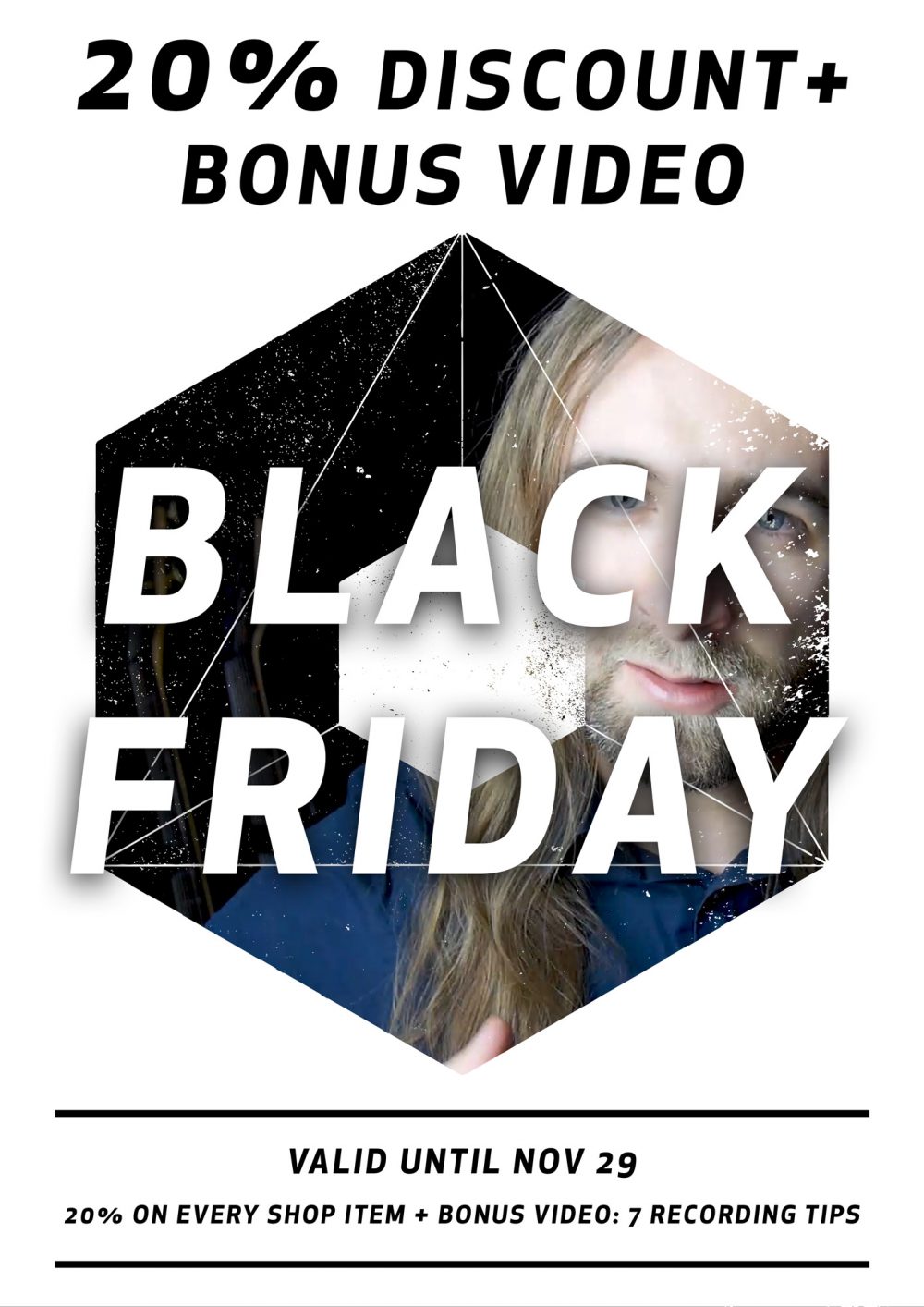 Until the 29th of November 2020 all courses have a discount of 20%.
Additionally you have access to a bonus video where Linus Klausenitzer speaks about recording tips. 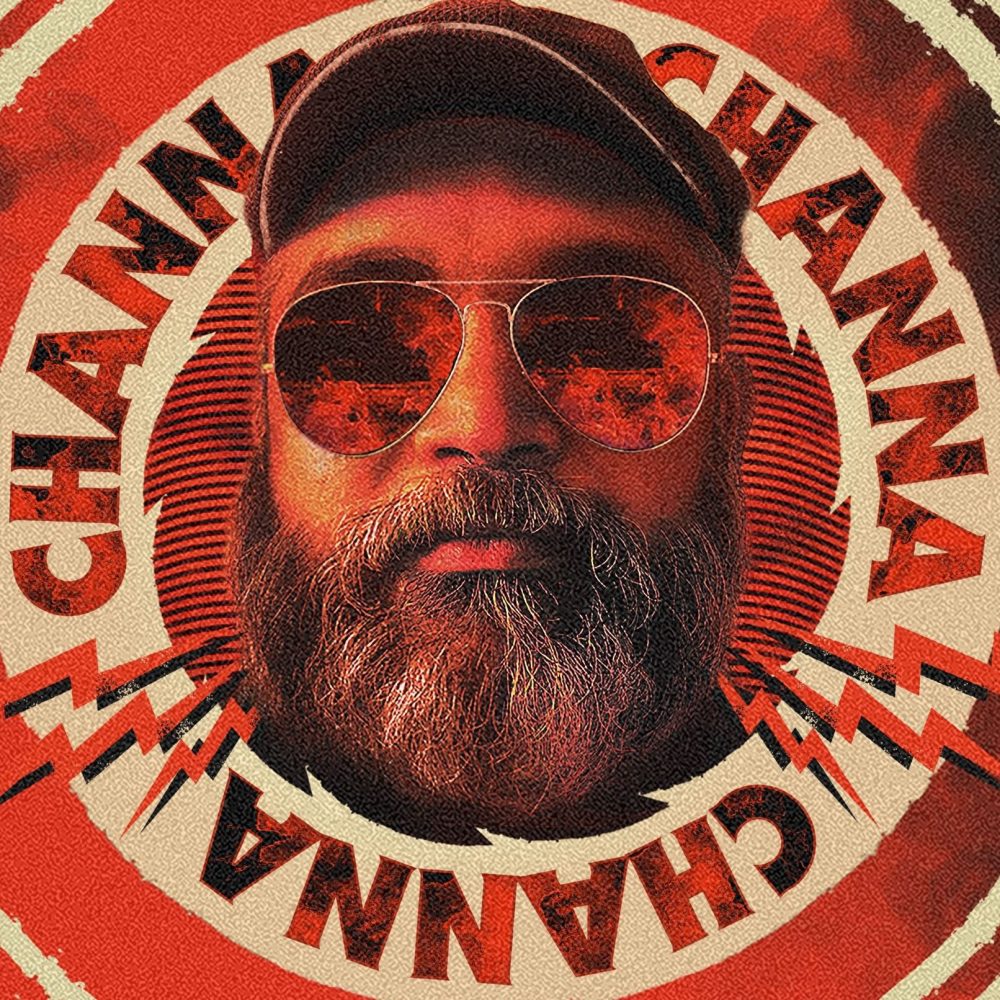 In this podcast “Channa Channa Channa” talks to Linus Klausenitzer about his past, Obsidious, Alkaloid and his split with Obscura.

You can also listen to the audio on Spotify and Apple Music.

At the 8th of August 2020 you can attend to a digital masterclass of Linus Klausenitzer at “edumusica.de”.

You can find further information at: https://www.edumusica.de/linus-klausenitzer 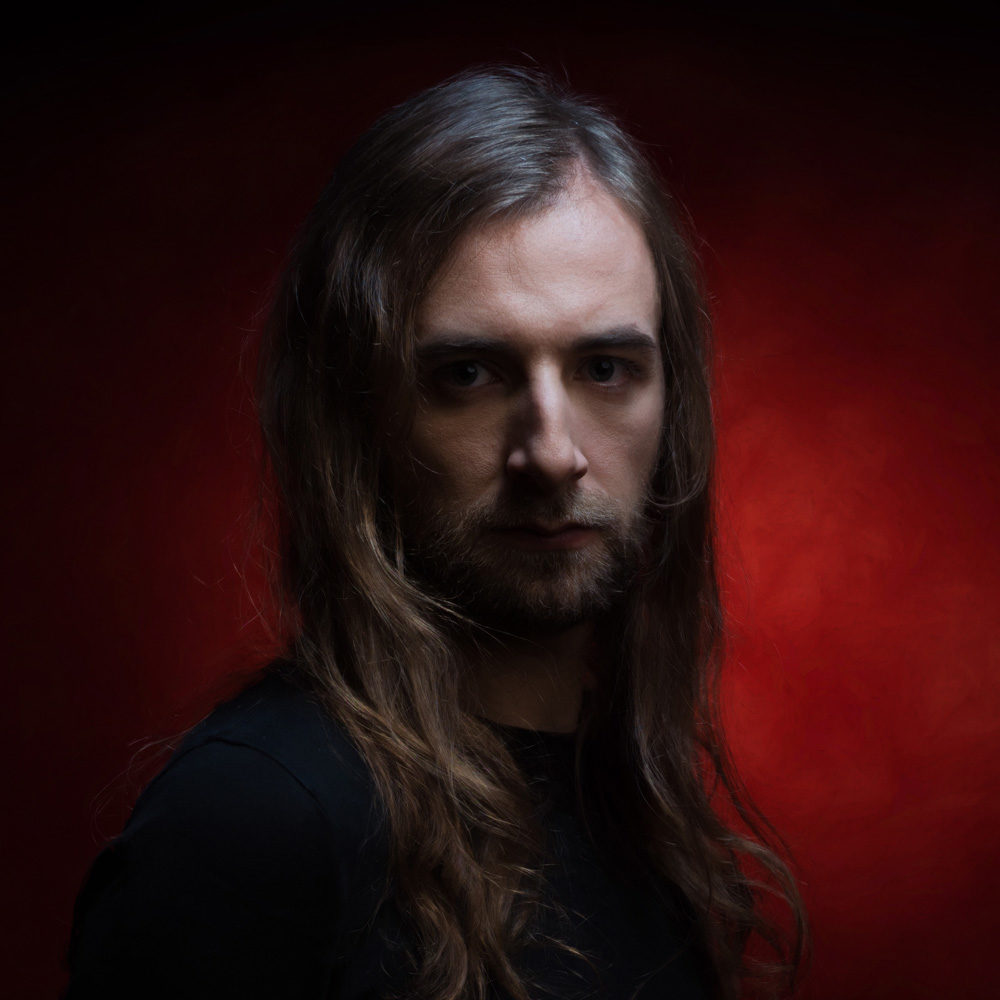 Linus Klausenitzer:
“As you might have read through the Official Obscura press statement already, I am leaving Obscura (as well as Rafael Trujillo and Sebastian Lanser).
Let me use this opportunity to explain the situation and tell you about the exciting plans that I have for the future.

I’m very proud of what we’ve achieved in the last 9 years in Obscura and I feel very grateful for what I have experienced during this time. We made 3 records together and toured regularly through 4 different continents. Very fast I became one of the main songwriters and in the end we signed with the biggest independent label of the world “Nuclear Blast”. No one except Steffen has been in the band longer than I have, and together with Steffen I was part of the company “Obscura” behind the band. So you can imagine that this was not an easy decision for me to take. I haven’t been feeling comfortable with the recent band situation anymore, including musical differences, so I needed a change to reach a next step. Obviously those differences were between the three of us and Steffen. There is still no bad blood but that’s why we ended the collaboration, before too many negative emotions appear.
That’s the simplified version of what happened. I understand that people want to know more in detail about it but those situations are hard to describe to people who were not involved.

On the other hand, Steffen has always been the most driving force and I will always be thankful for his contributions. If he wouldn’t have started Obscura so many years ago my career would have taken a whole different path. I am happy it was this one. Normally when 3 of 4 people want to continue to make music together, the remaining band member leaves. But Steffen is the only remaining founding member so we decided that he should go on with the name “Obscura”. I wish the very best to Steffen and the future members of Obscura. I would like to thank our amazing crew, our business partners and specially all our fans for all the good times and unforgettable experiences. I am thankful for everyone who continues following me on my journey!
It feels very good to be open to new opportunities now and to expand my existing activities that I love.

During my time in Obscura I have been very active with other activities that I plan to continue: Giving bass workshops all around the world. I
recorded bass and composing lessons for different platforms including my own website: linus-klausenitzer.com/shop
And then there is another activity that I have always loved a lot: Being a recording session musician. I was able to record with amazing
international talents and heroes of my youth. If you are interested in my work, please visit my website or get directly in contact with me.

Let me tell you about my future plans:
In Obscura I had the privilege to play with some of the best musicians in the metal scene. Some of them are my band colleagues of the band “Alkaloid” since a couple of year already. We are in the song writing process of our third album right now.
With the other part I will form a new band that I am extremely excited about: “OBSIDIOUS“. Please visit obsidous-band.com to listen to the
first audio clip and for more information. Beside the fact that Sebastian and Rafael have became close friends of mine we have always
worked well on songs together. We want to continue with the vibe of Obscura songs that we composed completely (except vocals): Clandestine Stars, Diluvium, Mortification Of The Vulgar Sun, Ethereal Skies, An Epilogue To Infinity, etc. We want to bring this style of composing to the next level.

When I started to compose for Obscura’s next album I was trying different musical directions. I just enjoyed the process of it and ended
up with 8 songs that want to see the light of day. Except for some songs, that we will use for Obsidious, I will use them for a solo album that I am planning on since quite a while.

I have some more plans, which I can’t talk about yet, but I think QUITTING OBSCURA, FOUNDING OBSIDIOUS and WORKING ON A SOLO ALBUM is already enough news for one day ;)”

These digital workshops don’t include standard exercises that you can find in most bass books and on YouTube. The concept was prepared to deliver exclusive content. The downloads include video files and exercises with PDF, Guitar Pro and playalong files. You can choose between 3 courses or buy them a bundle.

The courses are available at his new webshop.

Workshop at the Wacken Metal Academy

The Wacken Metal Academy is part of the Hamburg School Of Music where you can be educated to get an official job title as metal musician.
On March 11th 2020 Linus Klausenitzer will present a bass workshop there:
Additional information and registration:
https://www.wacken-metal-academy.com/workshop-mit-linus-klausenitzer/

Obscura released 2 pro-shot live clips of “The Monist” and “Centric Flow” from their 15 years anniversary show 2018. 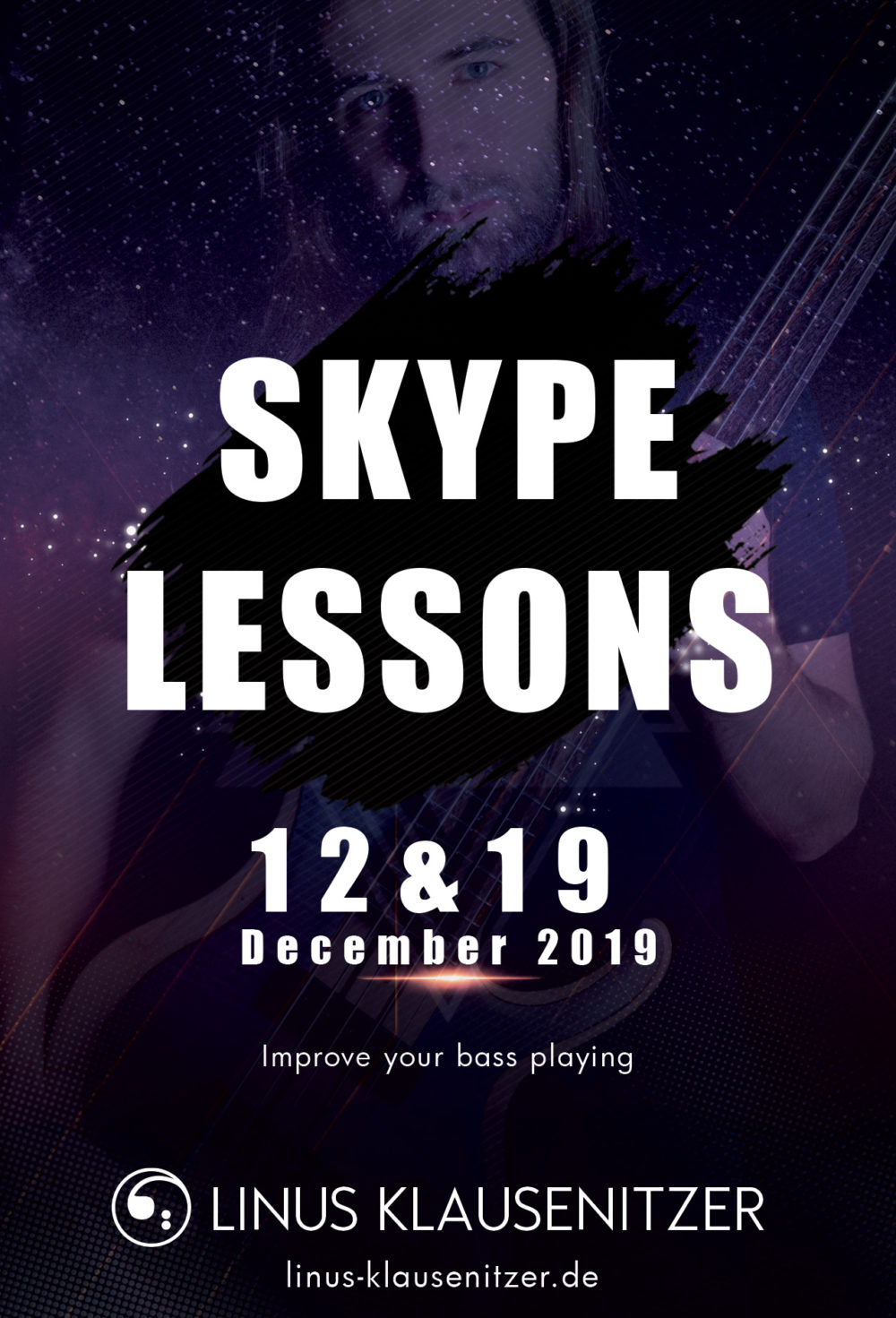 For the first time you can book Skype lessons with Linus Klausenitzer. Those lessons are not on a regular basis and slots are limited.

Linus Klausenitzer will go through all the questions you have. The content is up to you. Possible topics: bass playing methods, learning Obscura/Alkaloid songs, technique, discussing your music, songwriting in general or music business.

The payment needs to be done via PayPal and to this email address: contact@linus-klausenitzer.com. You have to send it as ‘friends and family’ otherwise you’ll need to send extra money. It is 45€ for a 45 minute lesson.

As soon as you have booked your spot in the form below and after the payment has happened your slot is locked. The payment needs to be done at the latest 24 hours before the lesson.

If you are interested in a specific topic, please let Linus know in the description field.

Note, that all times are CET (Central European Standard Time) so please calculate the time difference to your time zone. 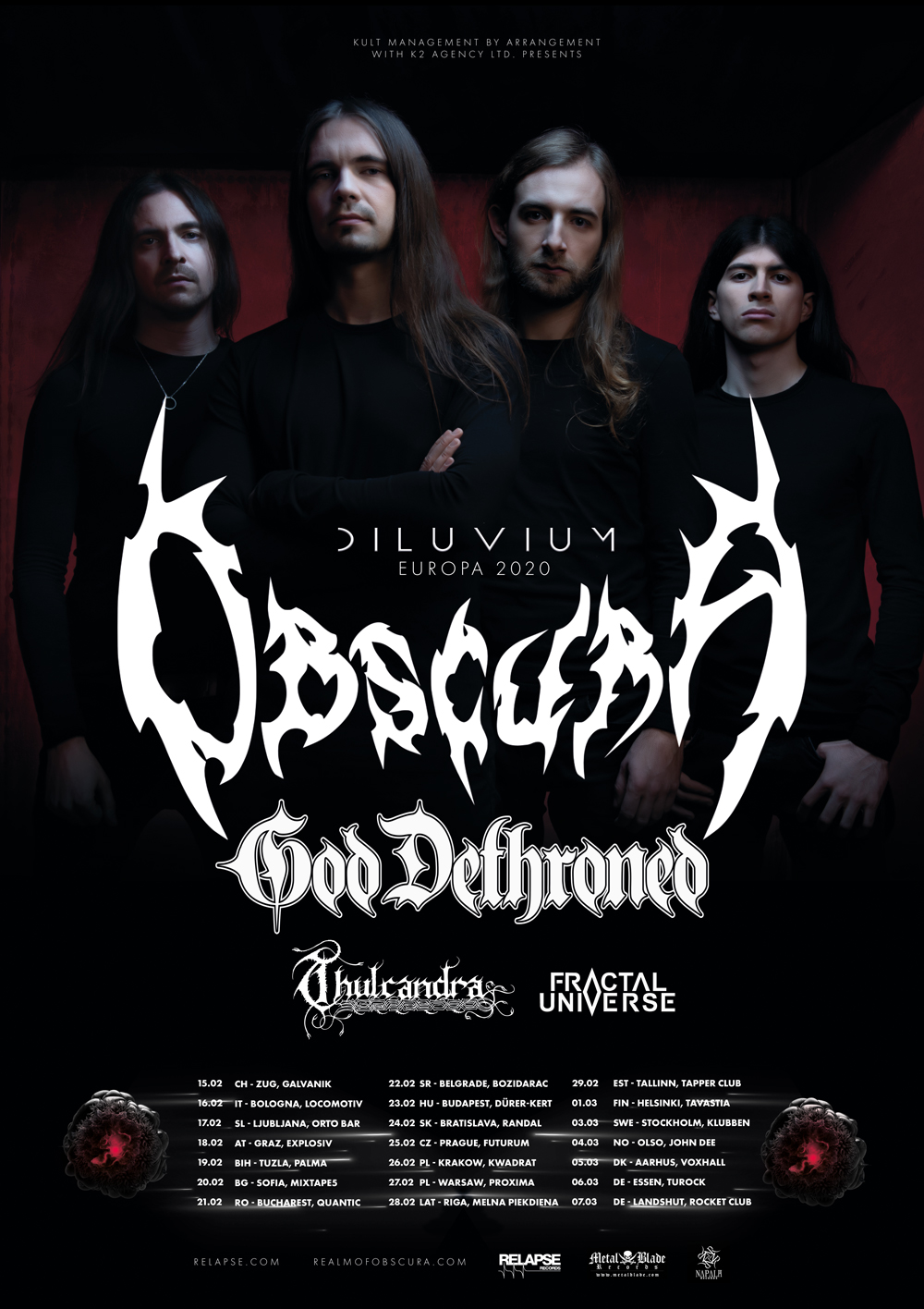 We’re finally able to confirm that OBSCURA has signed to Nuclear Blast !

Partnering with the world’s biggest independent metal label feels like the start of a new chapter for OBSCURA and we are very much looking forward to a great collaboration and to releasing our forthcoming sixth studio album with a great team at our side.

Thanks to all of you for supporting us on our way!

Any cookies that may not be particularly necessary for the website to function and is used specifically to collect user personal data via analytics, ads, other embedded contents are termed as non-necessary cookies. It is mandatory to procure user consent prior to running these cookies on your website.